After a hectic couple of weeks the team in the Lothians decided to have a spa day with afternoon tea as part of their team building day.  This nearly ended in disaster before it even begun for Danielle who left her bag with her swimming costume on the bus. Luckily Wendy stepped in to the rescue as she had not one but three swimming costumes in her bag!!!  We were joined by two new community living workers recruited for the Haddington and Tranent networks.

Everybody spent time getting to know each other in a relaxed environment. The existing community living workers shared their experience of Neighbourhood Networks so far. We started to think about how we want to work as a team going forward and agreed that communication between each other was the most important thing. The team committed to checking in with each other regularly so that the community living workers feel connected and supported. Plans were also put in place for the first Team meeting as a full staff team.

Everyone felt that this time was well spent and are looking forward to building on these relationships as a team. We realised that sometimes it’s important to stop and take some time out and just be with your colleagues to get to know them which in turn will create good teams and a positive working environment. This will also benefit the members we support and the organisation. 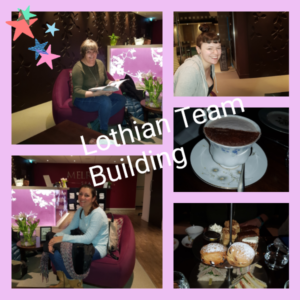